Part of me wants to tell you about the book we read for book club. Another part says, "Naperville Now, only you want to read about that. Get on with the good bits."

Good doesn't begin to describe it. 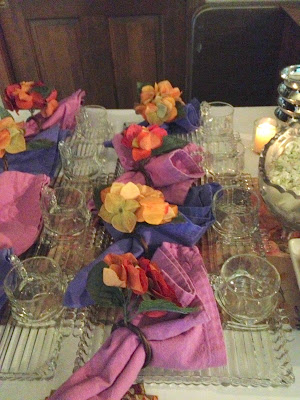 Remember those luncheons at church? Little sandwiches on glass plates with a punch cup to balance? Of course, our cups held watermelon gin punch, something Presbyterians might frown upon (in a church setting). 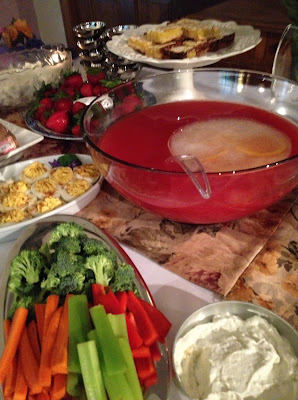 Alternatively, there was this: 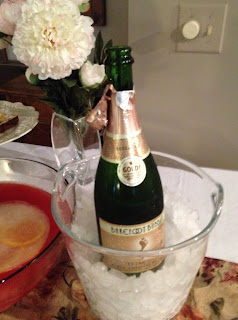 Also, tarragon chicken salad, deviled eggs, crudités, lemon bars -- pretty much what one might find on a bridge party buffet circa mid-century, which is when our book was written. 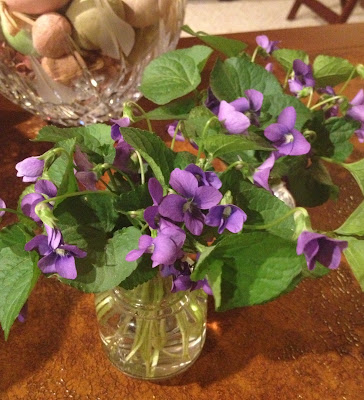 We read Carson McCullers' The Member of the Wedding. I know not how I managed to graduate from high school without reading this stunning story.


"But what is it all about? People loose and at the same time caught. Caught and loose. All these people and you don't know what joins them up. There's bound to be some sort of reason and connection. Yet somehow I can't seem to name it. I don't know."

McCullers describes Frankie's world brilliantly. Hot, sticky, lonesome, forlorn, waiting for something to happen. Which it does, sweetly, terrifyingly.

Which leads me to ask which books have you not read that you should have read? Do you have a literary bucket list? I ask because on a field trip to see The Great Gatsby, there were actually some in our group who had not read the book.

Apparently our British cousins are keeping a list of overlooked classics of American lit. The Member of the Wedding is on it, along with a lifetime of reading. Here's the link.

With thanks to Carol, our host, for a wonderful evening. That homemade chocolate gelato changed my life.

Each week, Naperville Now participates in Mrs. Matlock's Alphabe-Thursday. Read what others have to say about the letter Z here.

Posted by Naperville Now at 10:39 AM 28 comments: Links to this post 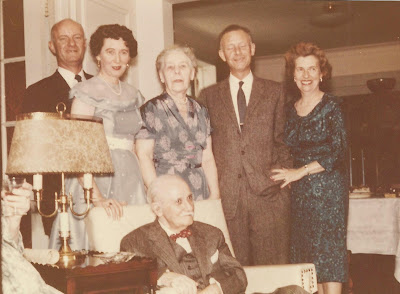 I have no recollection of this bon voyage party for my aunt and uncle in May 1962.

I've seen other pictures. Many people were there that day in our 3-bedroom apartment in New York. Not exactly an easy place to avoid 20 adults.


And yet, this day is not in my memory.

Here are my uncle and aunt, grandparents and parents, all dolled up for the event. The dining room table is decked out with candles and chocolate cake. Someone holds a wine glass on the left.

Dad's eyes are shut (in nearly every photograph of him, it was thus). Mom, 40-something, looks fabulous. Everyone looks happy, even my grandfather, who had had a stroke some years before. I like a man who can rock a bow tie, and a red one, at that.

I want to step into this moment and interview everyone (which is probably what I wanted to do in 1962, so I was farmed out to a neighbor so I wouldn't go all Edward R. Murrow during the party).

I want to ask my grandfather who his great-grandfather was. I want to thank my grandmother for sending me $5 every blessed week that I was in college. I want to get rid of that stupid ashtray on the end table and yell, "Smoking will kill you!"

The only non-smoker, my grandmother, will make it almost to 100. Not so for everyone else.

Photographs quick-capture vitality and hold it for all time. When we look back, maybe we shore up our own light, their gift to us in the first place.

Posted by Naperville Now at 11:48 AM 7 comments: Links to this post

Right on schedule, the squirrels have struck. Is there anything worse than squirrels with revenge in their hearts? 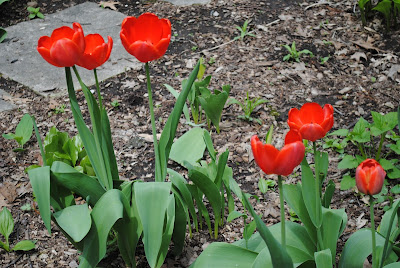 This is what I think I know about tulips: 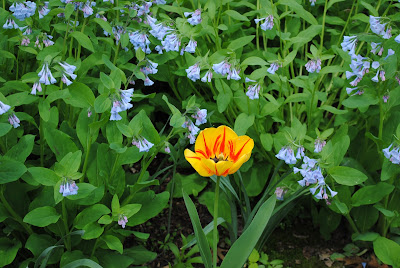 (Is there anything better than a rogue tulip? I have no memory of planting this bulb.) 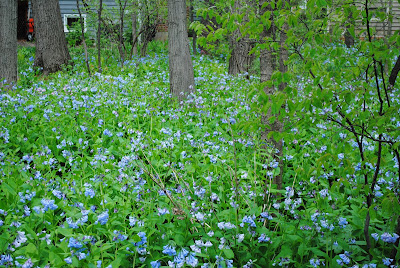 And then there's the field of Bluebells, which we inherited. It spreads so vigorously I am sure that one of these days, I will be drinking coffee and look down to see plants growing through the kitchen floor. "Hi!" they will say. "We're spreading. Pick up your feet."

Tell me how your garden grows and who/what you are battling this time of year.

FYI: Naperville Now is going to take a break from posting. I am contemplating a move to a different host, possibly under a different name. I need to gather my rosebuds while I may (and fight the squirrel population of Will County) to determine the next best thing. Thanks for reading.

Each week Naperville Now participates in Mrs. Matlock's Alphabe-Thursday. See what others are writing about the letter Y here.

Posted by Naperville Now at 9:18 AM 12 comments: Links to this post 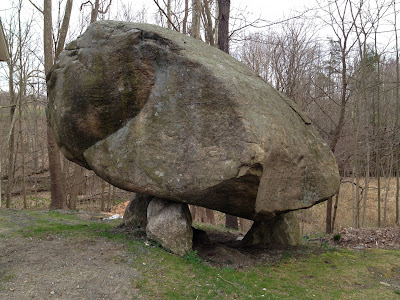 Glacial activity was very big when the world was much younger. For years, this amazing formation near New York was believed to have been created by a glacier.

Turns out, the ginormous rock, called an "erratic" by geologists, is formed from granite not indigenous to the area. It may be a dolmen, "a Celtic stone to memorialize the dead." 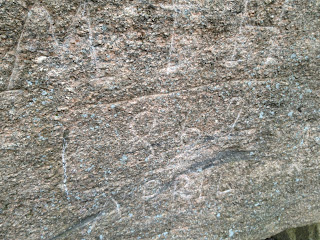 Celts in Connecticut. I may just write that musical.

(As you can read, it's been here at least since 1862, per the graffiti some idiot was compelled to carve one April day a year into the Civil War.)

Many years ago, we visited Carnac, France, renowned for its many, many standing stones lining the countryside. Most were erected around 3300 B.C., give or take a millennium. 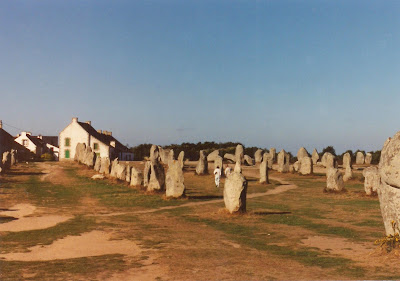 I nearly failed geology my sophomore year. All those stupid rocks looked alike to me, and by the end of the semester, I achieved a passing grade by 4/10ths of a point. The romance of stones never came up. Had it, I might be in an entirely different line of work. 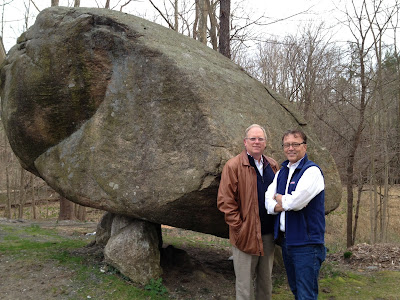 With thanks to Stephen and Kevin for the rock drive-by and a splendid dinner just up the road.

Each week Naperville Now participates in Mrs. Matlock's Alphabe-Thursday. Read what others have to say about the letter X here.
Posted by Naperville Now at 5:08 PM 17 comments: Links to this post

Once again I am posting from my phone for Mrs. Matlock's Alphabe-Thursday. Note to self: take laptop on vacation.

I am in St. Louis with daughter #2, cruising the sights of the botanical garden.

I also managed to leave my camera on the kitchen table, so the iPhone is the best I can do.

One of these days I will create a collage of all the pictures I took, you lucky things. 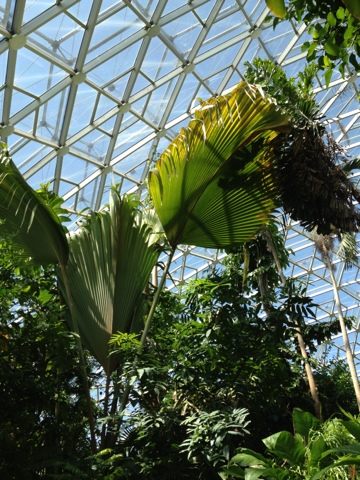 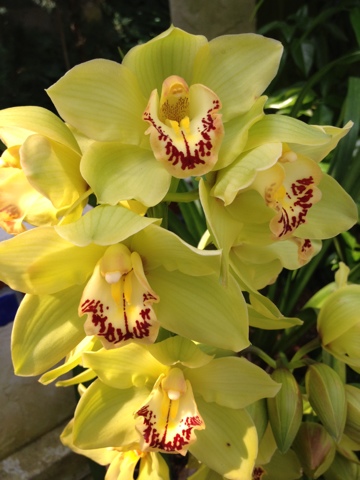 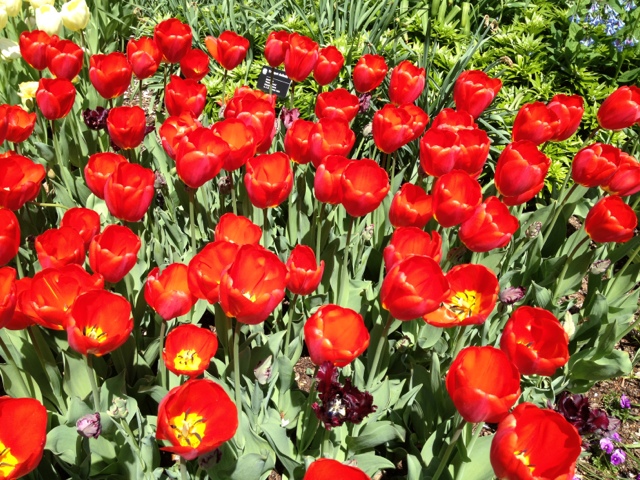 Posted by Naperville Now at 6:19 PM 11 comments: Links to this post

You walked right by our table at Balthazar's in Manhattan's SoHo last weekend.

I was struck by two things: you are quite tall (and growing taller with each recollection of this brief event) and whoever does your color is genius.

We don't get many celebrities in Naperville, IL, so forgive me if I sound a little star-struck in recalling your stroll past our dessert. 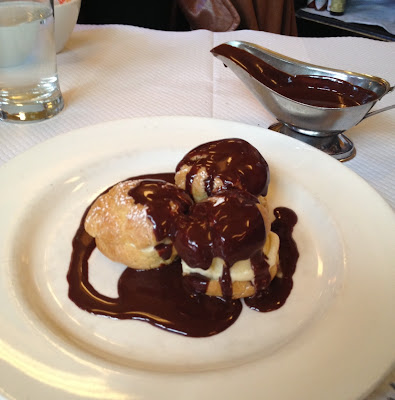 (I ask you, can one ever have too many profiteroles?)

The maître d' did a wonderful job running interference with a table of ladies, whose ringleader flew across the restaurant to take your picture. For a large man, he was very graceful as he put himself between you and madame and her iPhone. She tried not once but several times to bully her way in your direction, but he would not be breached. Hope you left him a nice tip.

I would not have expected such behavior from a woman 1.) dressed as Bergdorf Goodmanly as she was and 2.) old enough to know better. (For the record, we most assuredly stayed in our seats, mainly because the place was so packed, there wasn't much room to maneuver, especially after eating dessert.)

I wondered if you were meeting someone or would you have joined us for lunch had we asked. Do you hang out with everyday people? Get your nails done and go shopping with a BFF? Read blogs and shop for garden antiques on Sunday? More importantly, do you order profiteroles when you can?

At the very least, indulge in the last. They are fabulous.

PS Let's do lunch next time you are in Chicago. I hear the Walnut Room at Marshall Field's Macy's does a nice Frango Mint Chocolate Ice Cream Pie. And I am fairly certain we will be left alone. Midwesterners are calm like that.


Posted by Naperville Now at 11:22 AM 6 comments: Links to this post

I'd like to say I'm sitting in the Grand Concourse of Grand Central Station to write this, but sitting is not particularly encouraged in the terminal. So my spastic thumb via iPhone on the train will have to do.

I'd also like to say ole George, my elusive ancestor, in velvet waistcoat and breeches, was waiting for me at the New York Public Library, but he was not.

Nor was he there to greet me in the lobby of the New York Genealogical and Biographical Society. He remains, alas the furtive triple-great grandfather that he is.

Researchers are essentially optimists. Which is why we read and scroll microfiche, pay money for fruitless document hunts, scour books (get sidetracked with the New York social register from 1904) and read stuff until our eyes can take it no more.

I'd like to say I have a lot of great stuff scrawled into my notebooks, but in truth there are just two things: the name of a guy who knows from early New York churches (this could be big) and a record of Aunt Geraldine teaching at P.S. 50 in 1905.

Genealogy is rarely about the home run. Sometimes a crack at the bat is all we get. So we keep running. 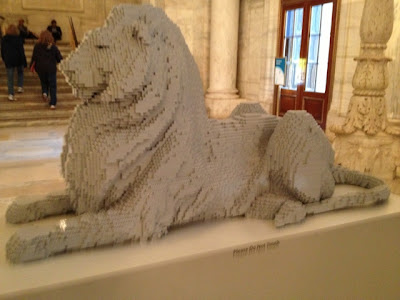 Posted by Naperville Now at 12:00 PM 20 comments: Links to this post

Naperville Now
In 1987, we left Atlanta (by way of Kansas City and St. Louis) on a corporate move to Naperville, IL. Next thing I knew, carpool was over and the kids were gone. While I try to figure out how that happened, I've taken up writing again. From the bottom of my heart, thanks for reading.
Sue Johnpeter